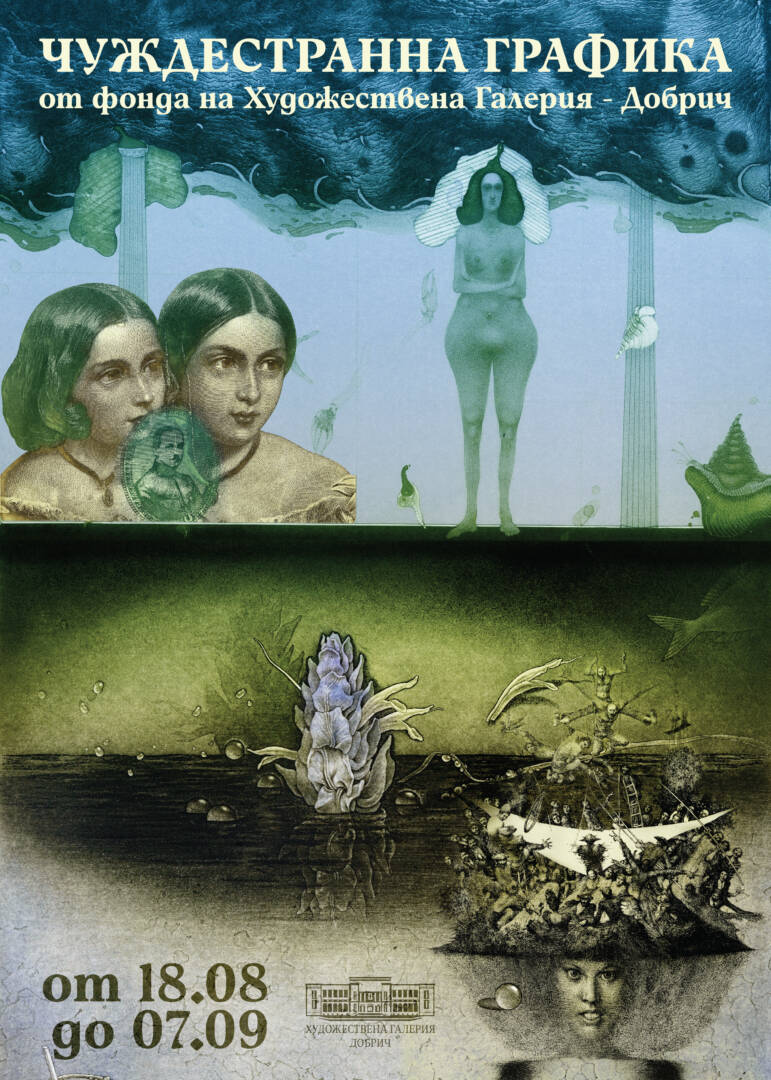 In the exhibition “Foreign Graphics” we present to you a collection of 49 graphic works from the fund of Dobrich Art Gallery, which you can view in Halls 1 and 2 from August 18, 2022. It includes works by prominent authors from Japan, Slovakia, Germany, Spain , Hungary, USA, Canada and others. The works are ofleading  artists and national schools in world graphics that also determines the quality of the exhibition. The works were purchased from the traditional editions of the International Biennal of Graphics – Varna, as well as from the personal exhibitions of some of the award-winning authors. Although small in volume, the collection bears the character of this significant international forum including works by artists of various nationalities, diversed in themes and styles but united by high professionalism and perfect techniques.

A well-deserved place takes the Japanese graphics. Impressing with their large format and executed in the difficult technique mezzotint, the artworks impact with precision and exactness of the implementation. Through realistic forms they create surreal world of pureness and perfection corresponding to the Japanese culture, technique and lifestyle. In time the Japanese engraving takes different characteristics such as world of sadness and craving expressed in the color engraving “From my collection. Two walls” by Hodaka Yoshida. A perfect implementation of the mezzotint technique are the works of Nabuo Satto  “Peep in”; seeking pleasures in this world or floating in it like “Going to and coming back III” by Katsunori Hamanishi, and “Like mountains” and “Metamorphoses” by Atsuo Sakazume. In the interpretation of these image-concepts referring rather to pure consciousness and creative immersion no distinction is made between the world of the absolute, i.e., the “divine” and the world of action in our being.

Striving for an introverted insight into the truth and its discovery beyond verbal settlements and unfinished thoughts are defining for the essence of contemporary Japanese graphics.

The works of European graphic artists stand out with the same professionalism and impact, but with different issues and imagery. Drawing and deformation play a decisive role in the realization of their ideas. Albin Brunovski, Vincent Hlojnik and Vladimir Gadjovic from Slovakia, Jose Hernandez from Spain and others create their own author’s world of fairy tales and fantasy on the graphic sheet. The existence and absence of nature in the life of modern man is analyzed /”Small Sea I” by Raimo Kanerva – Finland/. In the graphics of the Polish graphic designer Kazimierz Makowski, nature and reality, a product of modern civilization, are opposed. In juxtaposition with Manet’s Breakfast on the Grass, Wunderlicht creates a successful, sarcastic image of modern man with the help of deformity and the grotesque. With the powerful and original work “The Session”, Rolf Escher empathizes with the idea of ​​alienation and the lack of real human presence.

Illustrating artistic and plastic trends of development, the “Foreign graphics” collection offers you the opportunity to familiarize yourself with the works of graphic artists of various nationalities, winners of numerous awards and international recognition.